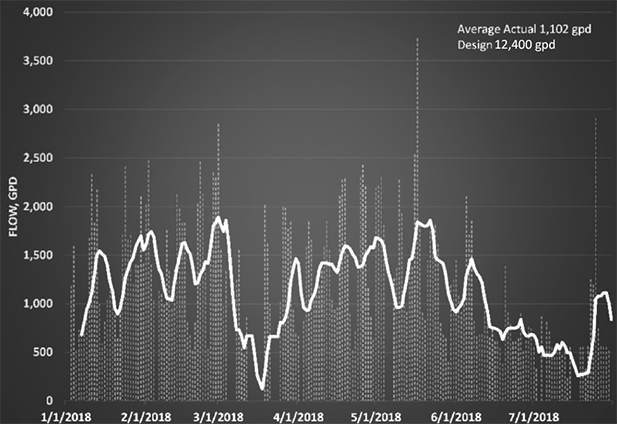 Fig. 1: Influent flows are highly variable and well below the design 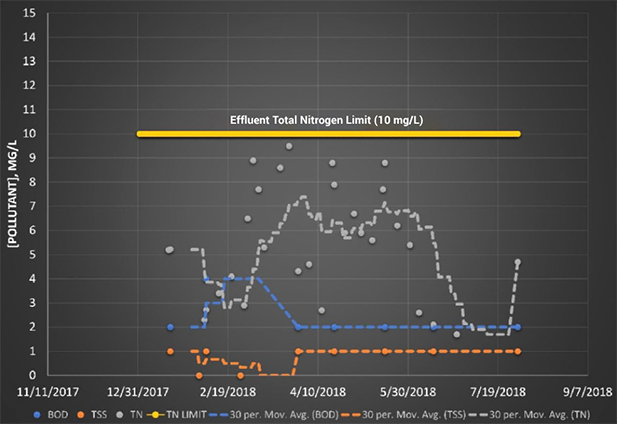 As part of a major expansion of its campus in 2015, Gerstell Academy, an independent pre-K-12 grade school in Carroll County, Maryland, tasked Innovatreat with creating a solution that would upgrade a failed Sequencing Batch Reactor (SBR) at the school’s existing wastewater facility. Gerstell Academy is a relatively new facility, and as such has modern water-restrictive plumbing fixtures, which result in lower than expected flows with higher than expected pollutant concentrations. The project would also require re-purposing as much existing equipment as possible, without expanding the footprint, while producing a high level of Biological Nutrient Removal (BNR) at a location where it has never been achieved before.

The biological reactors are integrated into the enclosure and include coarse bubble anoxic mixing and fine bubble diffusers for the aerobic requirements. Each diffuser assembly is accessible and retrievable from atop the tank.

Sanitary wastewater is collected in underground infrastructure (septic and equalization tanks), then screened and processed by the miniMBR® Package Plant. Process set points were determined to allow the new plant to attenuate the highly variable diurnal flow patterns and meter the wastewater for optimizing the nitrification/denitrification process. Innovatreat’s miniMBR® has been designed specifically to handle such large flow fluctuations while maintaining a high level of biological nutrient removal.

The miniMBR® Package Plant was set in place, pre-wired, pre-piped and pre-tested for final connections on a single day. Within two weeks of delivery, the complete system was operational and commissioned for startup. Since its launch, the miniMBR® process has provided effluent continuously below pollutant load and concentration limits.

The challenge of performance in an BNR process is in the control of the biology. In particular, nitrogen removal requires stable environments for both nitrification and denitrification to occur. The large fluctuations of influent volumes due to the daily variations in flow and load – the facility is a school, and as such, wastewater generation is sporadic and seasonal. This is where the SBR Process struggled. The miniMBR® has been continuously achieving BNR compliance despite the varying influent at Gerstell Academy’s WWTP.